Clarksville Station In Roxboro, NC – A Phenomenal Steakhouse With A Haunted History 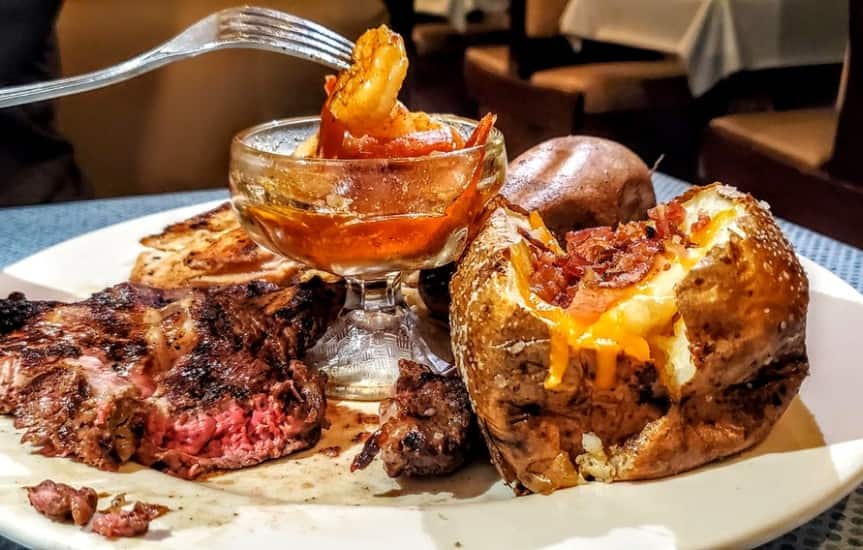 This post may contain affiliate links to help keep the trippy content coming. If you click on a link, we may earn a small commission, but it won’t cost you a penny extra.

Clarksville Station in Roxboro, NC, not only has fantastic upscale dining but a fascinating history of a train station made into a restaurant with haunted train cars.

The restaurant is an actual classic Victorian train depot built in the early 1900s in Clarksville, VA. When the depot closed in 1973, it was moved 45 miles to Roxboro and turned into a restaurant to preserve the unique history of America’s past.

After being open for 44 years, the restaurant went up for sale. Bryan Day, who had been a busboy here in his teenage years, saw the “For Sale” sign and decided to purchase it.

Bryan had relocated to Roxboro to help take care of his grandmother but was just about to move away to take a job in retail management at Old Navy when he saw the sign.

Instead of moving away, he took a leap of faith and purchased the restaurant, knowing it needed a lot of TLC, including remodeling, hiring a new chef, and revamping the menu.

The restaurant would open just one month later after he purchased it with a cozy, yet modern look and a mouth-watering menu. 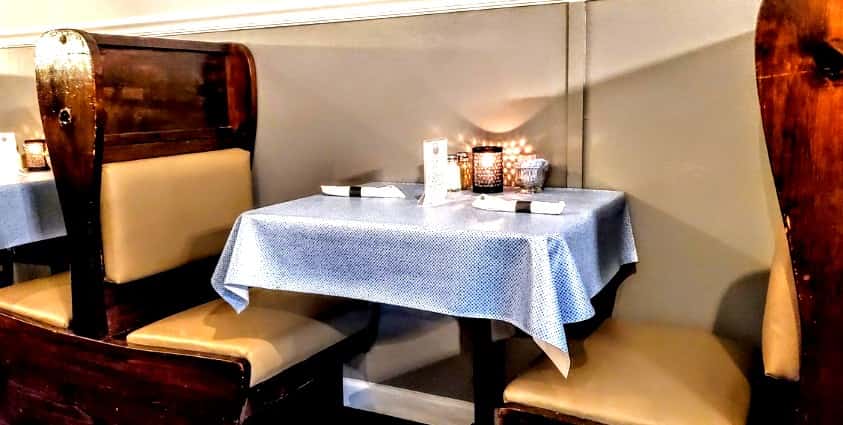 Bryan is the talent behind the new ambient decorating style. The walls are painted neutral grays, and the original booths were preserved as they are reminiscent of riding in a train car.

Bryan With Sister and Mom 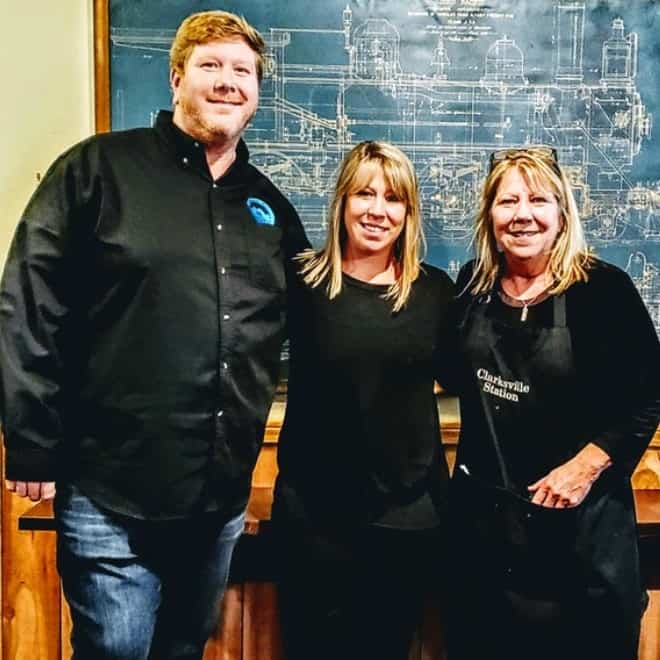 Bryan wasn’t alone. He had the help of his mom, Rhonda Loftis, and his sister, Tracey Vaughan.

All of them work at the restaurant, and you’ll most likely see them there greeting and taking care of customers with their friendly country charm. 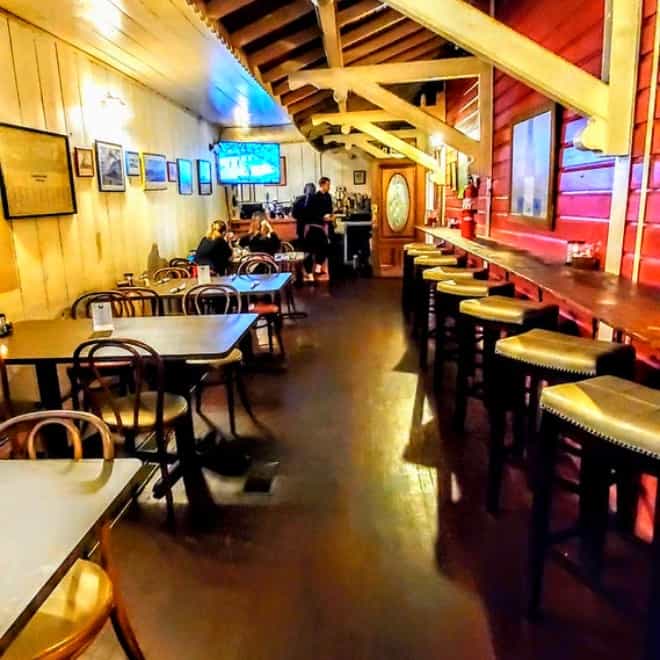 The restaurant has a room with a full bar that’s perfect for relaxing with friends or watching sports on one of the two large flat-screen TVs. 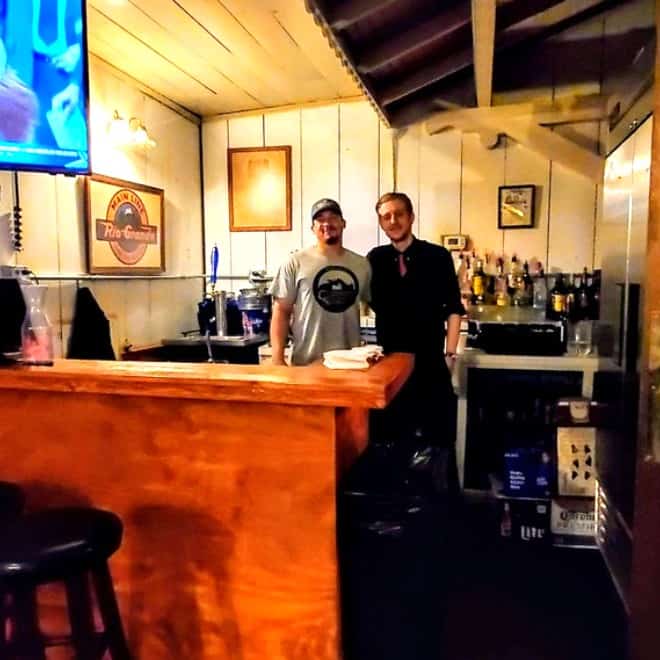 Chef, Jarren Winston, (left) is the cooking genius behind the food and Taylor Rimmer (right) tends the bar. 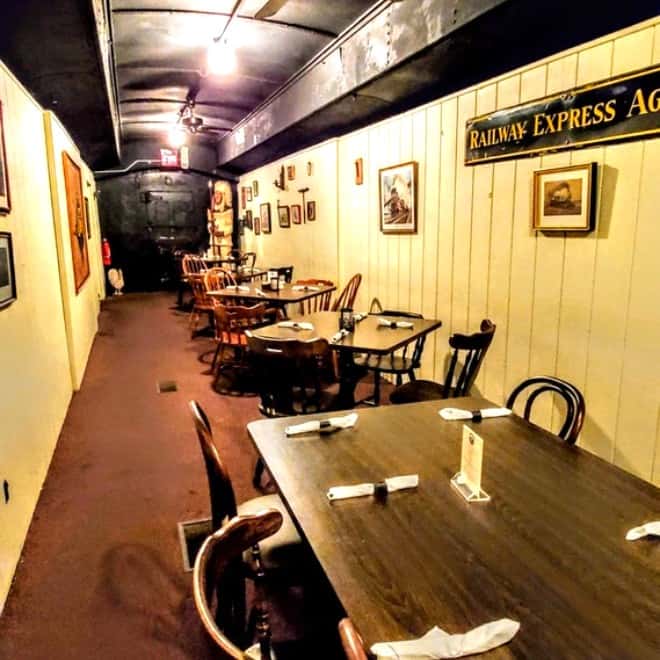 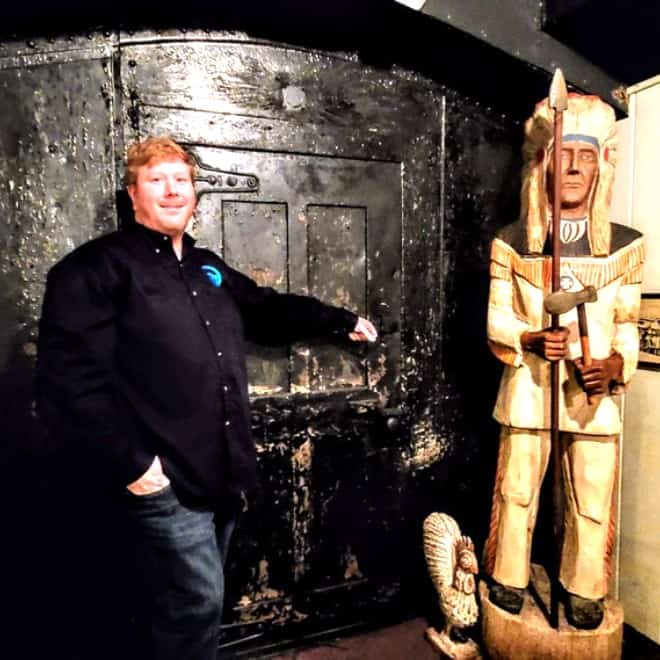 Two train cars from the civil war era are attached to the sides of the restaurant to serve as additional dining rooms. During the Civil War, one was used as a morgue car and the other a hospital car.

Customers have heard cries in the dining cars after the restaurant was closed for the night, and one customer claimed they saw the image of a conductor in a mirror while dining.

Bryan claims he has heard noises in the kitchen while working late at night that sent him home early.

The resident ghost is lovingly called Cedric, and whenever anyone hears or sees anything suspicious, they jokingly blame it on the ghost.

Bryan’s future plans include remodeling the steam cars to the same modern look as the main dining area. 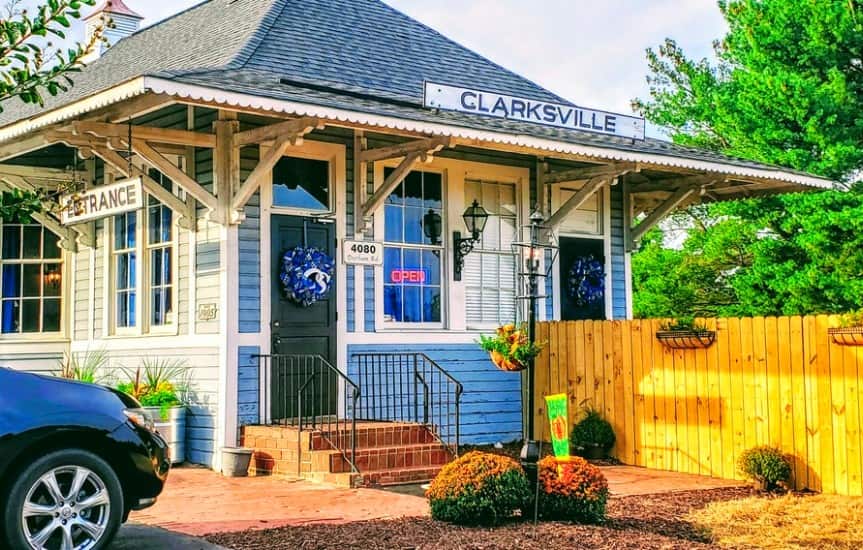 Bryan’s brother, Travis Vaughan, also contributed to the restaurant by updating the landscaping. 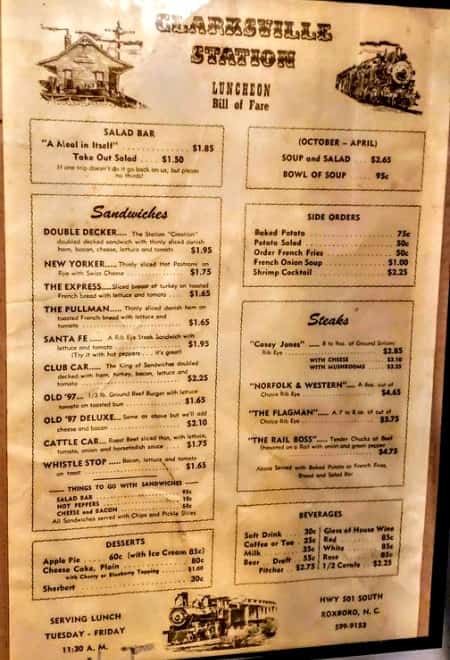 On the wall, you’ll find this Clarksville Station menu from days long gone when you could get a bowl of soup for just $0.95. 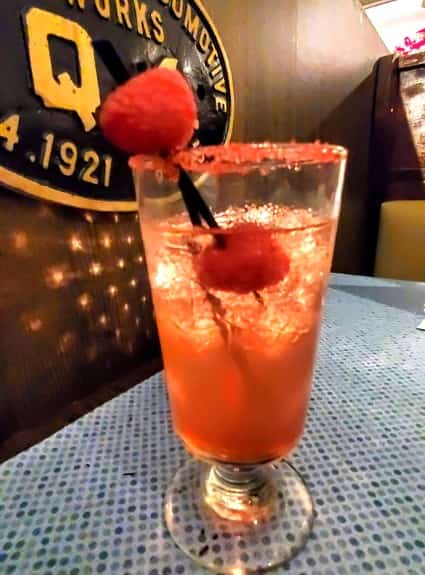 This is the Raspberry Kiss Cocktail made special for Valentine’s Day. (Don’t worry, they’ll make it any time of the year if you just ask.) 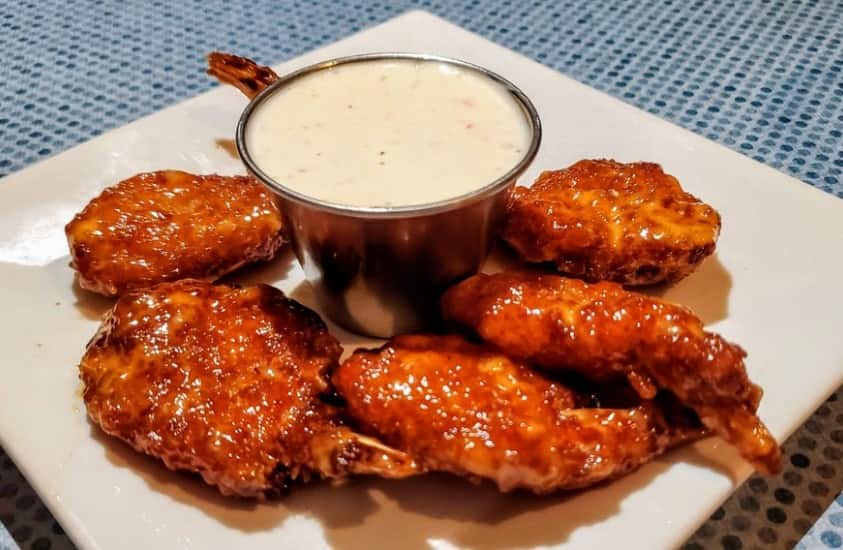 The Firecracker Shrimp is phenomenal. The shrimp is incredibly fresh, and the sauce is the perfect spicy-sweet. It doesn’t need or come with a dip – (I just thought it looked pretty in the picture.) 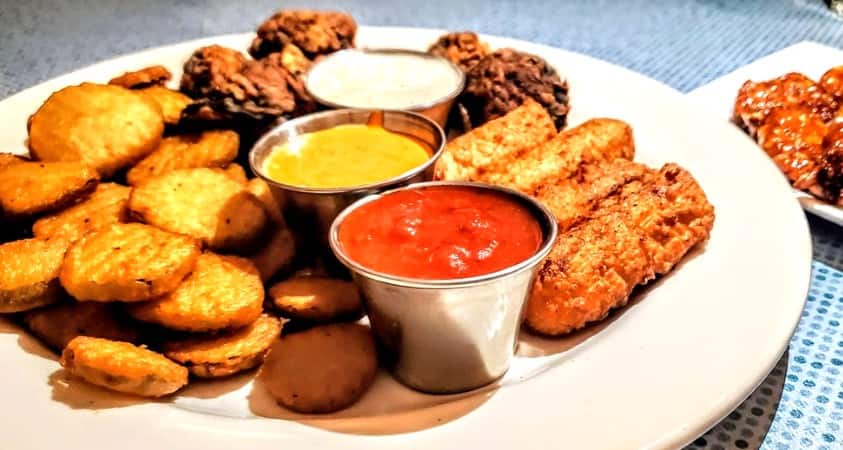 This plate features some of the appetizers you can order – Fried Pickle Chips, Fried Cheesesticks, and Fried Mushrooms. All are wonderful and work well with the dipping sauces, which include Marinara, House-made Ranch, and House-made Boom Boom Sauce. 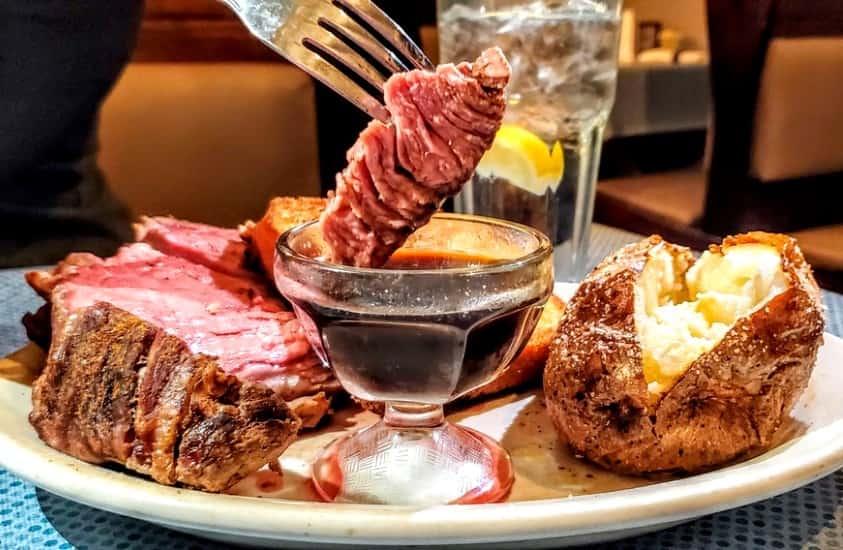 Hopefully, you can tell by looking at this Prime Rib that it’s perfectly cooked and is going to taste fabulous once it hits the au jus (which it did)! It’s slow-cooked for two hours and cut to order.

The Baked Potato was fluffy on the inside and had a good salty crunch on the outside. 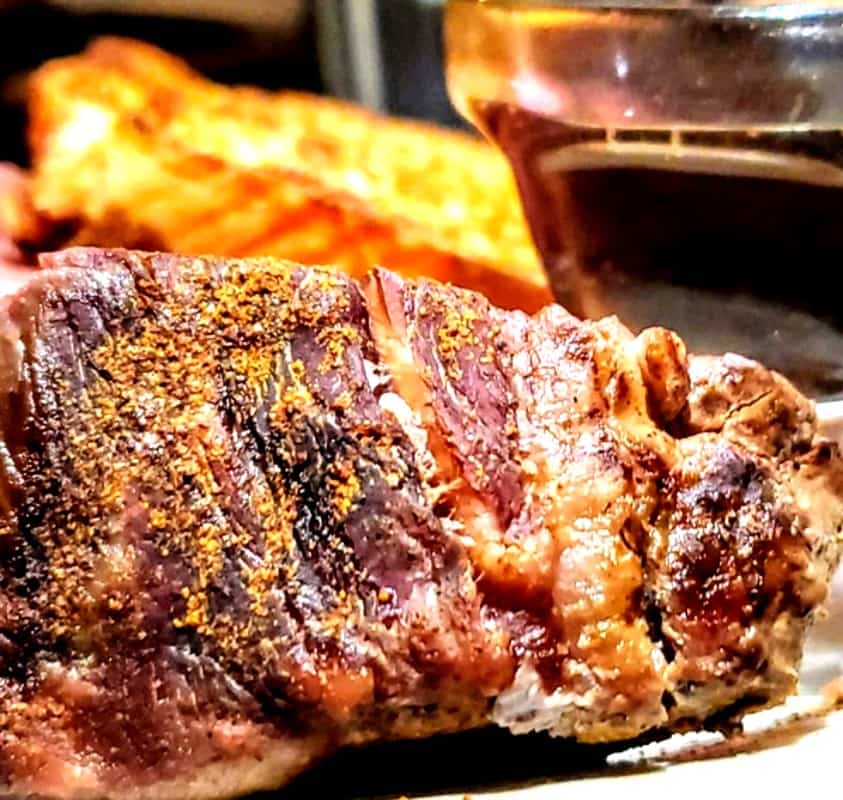 Here you can see the rub on the side of this beautiful cut of Prime Rib. (Only served on Friday and Saturdays.) 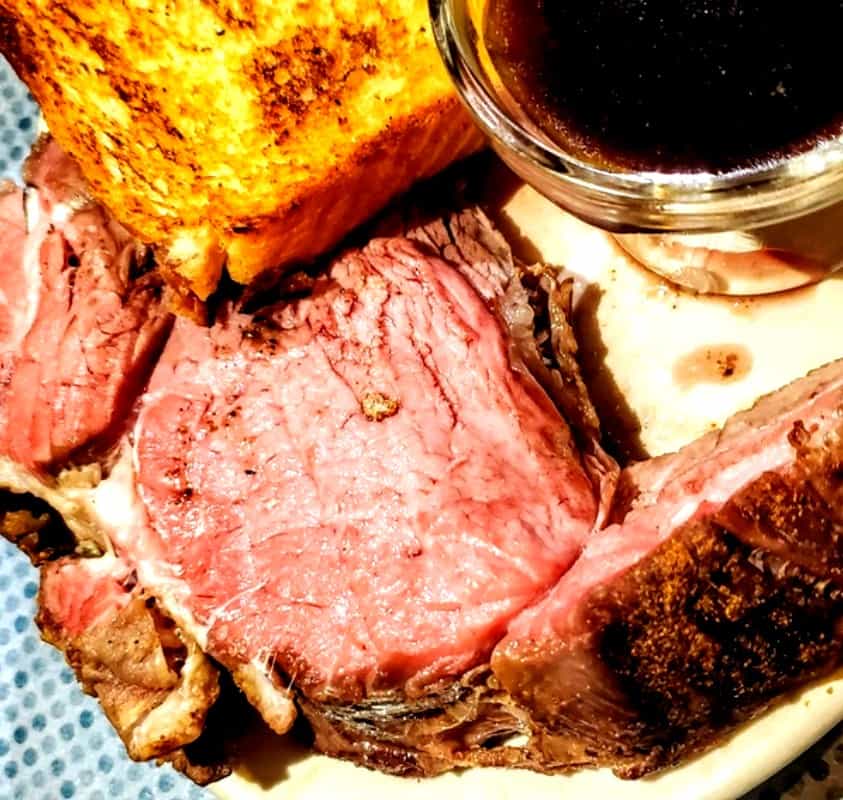 I can still taste the savory crunch of the Texas Toast. It’s the best I’ve ever had.

One of their most popular dishes is the Marinated Chicken Haimson, which is marinated for three whole days in a special pineapple-soy sauce and then cooked on the char-grill. Ours came served on a bed of Rice Pilaf, which had a great flavor.

You can get a plain baked potato or this Loaded Baked Potato, which comes topped with bacon and cheese.

I would highly recommend trying the Ribeye Steak. It’s so tender, you can cut it with a fork, and the flavor is incredible. 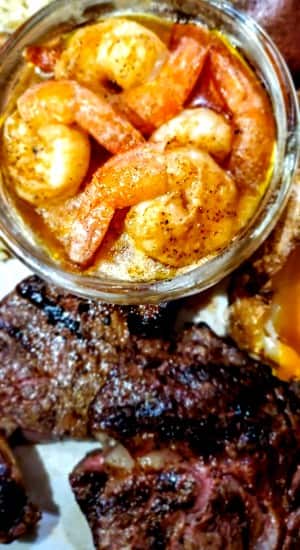 The Sea Fare Shrimp has a rich buttery flavor and was so good it was even delicious the next day cold! My husband, who usually doesn’t eat shrimp or steak, said these were his favorite dishes.

I always appreciate a great salad bar stocked with several veggies, and this one didn’t disappoint. I noticed the servers were very attentive at keeping it freshly stocked. 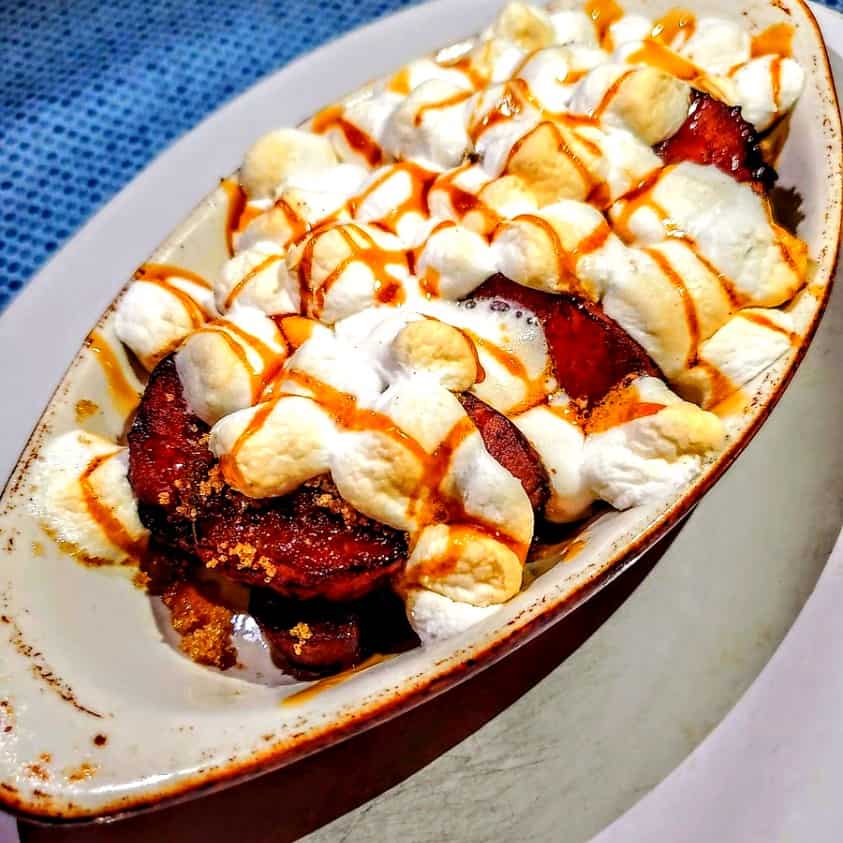 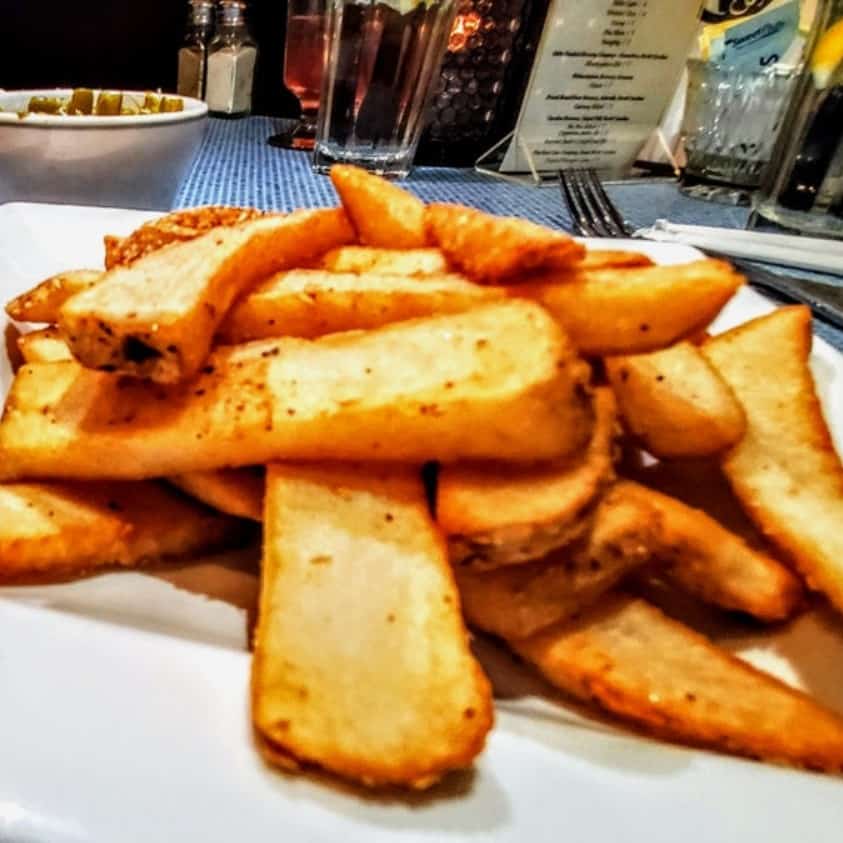 Above is the Loaded Sweet Potato, which was good enough for a side or dessert. The French Fries are somehow seasoned so well they taste amazing. 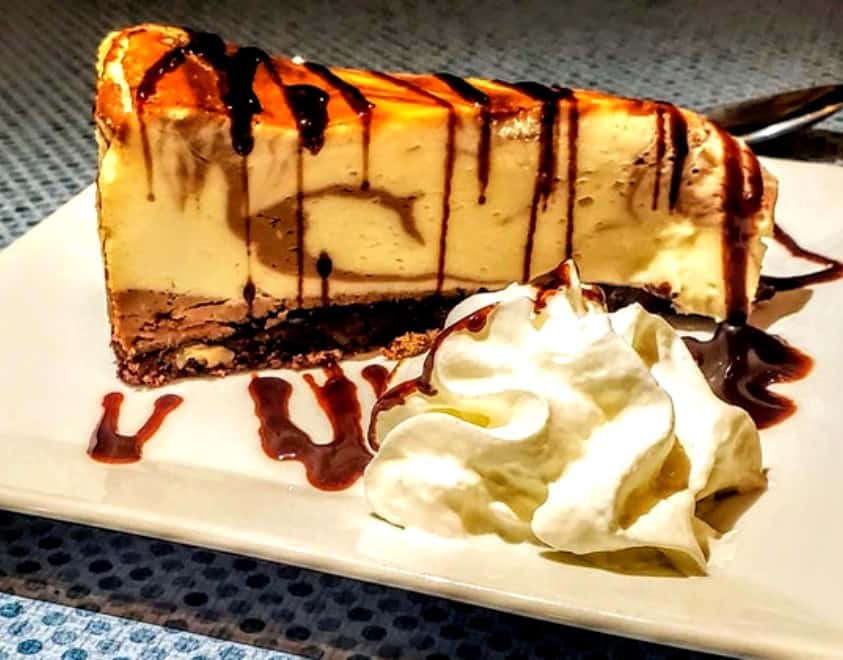 Be sure to finish your meal with this Double Chocolate Walnut Brownie Cheesecake. It’s as good as it gets – creamy and tart with a chocolate sauce drizzled over the top and a walnut crunch.

Skeeta Currier, who works for WTVD news station in Raleigh, makes the cheesecake for this restaurant and well as others in the area. Apparently, he is a TV cameraman by day and Cheesecake Superhero by night.

I would put this restaurant at the top of your list when looking for fine dining in Roxboro. Everything is truly delicious, and the history makes the experience even more memorable.

But save an extra seat at your table, because Cedric may want to join you.

Looking for a place to stay in Roxboro, NC? Check out our VRBO lake house rental on peaceful Mayo Lake. It’s on a secluded cove and comes with kayak and paddles boards.

I love finding fun spots in the Carolinas to visit like quaint towns, country stores, and fantastic food. I can't wait to share it with you!

By continuing to browse the site you are agreeing to our use of cookies.